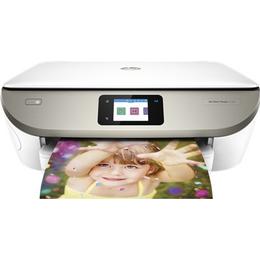 I've had this printer for a year and a half, and have had nothing but issues with it. Pretty much every other day it has to be powered off/on to get it recognized anywhere on the network again. Despite it having an IP address, and being visible in DHCP on the router, and being "online" on the source PCs it will not print anything until rebooted. Often it can't shut down properly and you have to disconnect power entirely. Sometimes nothing works until after you reconfigure the WiFi (even though it *still has an IP address listed on the display!*). Sometimes it will bluescreen-crash (really) mid-print, and start the entire document over after being forcefully rebooted. Print-quality starts out as excellent, but deteriorates to smudgy liney stuff at 25-50% ink remaining, forcing you to buy new cartridges even when the printer reports plenty of ink left. This printer has been an endless source of frustration, and I will watch it burn with a gleeful smile as soon as my new (non-HP) printer arrives. I'll give it 2 stars despite all these issues because when it *does* work the prints are fast & good-looking, and the photo-prints are downright gorgeous. Having a closed paper-tray is also a big plus since you can have paper lying there for weeks without worrying about dust build-up.